Every year there are a lot of Synergy members who decide to study abroad. Some of them have returned to Nijmegen the last weeks. I was curious about their adventures and experiences, so I made an appointment to speak with some of them. In the final part of this miniserie I spoke with Niek Stad.

While enjoying a pitcher and some nachos in The Yard, I had a long conversation with Niek. Unfortunately The Yard doesn’t serve noodles, so Niek needed to accept the Mexican nachos. Niek went to Shanghai for 4 months. His reason to study in Shanghai was clear, about 6 years ago Niek went to China with his high school. During this trip he became very enthusiastic about the Chinese culture and especially about Shanghai.

Niek went to Shanghai with the expectation that a lot would have changed in 6 years, his expectation was true. “When I went to China 6 years ago every Chinese wanted a picture with me, now there were barely people who wanted a picture with me.” Whether this is because Chinese people are more accustomed to western people or that Niek hasn’t become more attractive than 6 years ago.... you can decide for yourself 😉. Beside this, a lot of typical old Chinese neighbourhoods are replaced for big apartment complexes.

“He said that I looked like Luka Modric, a football player of Real Madrid, a note Luka Modric isn’t the hottest guy in history.”

During his semester in Shanghai, Niek followed 3 elective courses. The level of these courses was a bit lower than an elective course in the Netherlands. All the courses were mandatory and Chinese people learn everything from their studybooks. Niek also had some courses with Chinese people and he had some weird experiences during his colleges with Chinese people: “One day I went to college and I was looking at my laptop to read an article about football. A Chinese guy asked me if I liked football and we had a conversation about football. At the end of our conversation he said that I looked like Luka Modric, a football player of Real Madrid, a note Luka Modric isn’t the hottest guy in history.”

Because all the colleges were mandatory, Niek only went on trips in the weekend. All the trips he made were in China because he had a single-entry visa. One of his trips was to an island, which was meant to be the Chinese version of Ibiza. This was an amazing experience for Niek: “Chinese people don’t visit the island because they want to travel outside China. Because of this all the hotels on the island are very cheap. I went to one of these hotels for 7 days and I never slept in such a luxe hotel, I had a bathtub on my balcony on the 21th floor.”

In the daily life there are a lot of differences between the Netherlands and China. One of the biggest differences is that the day of a Chinese starts earlier, most of the people are at their work on 7:00 and from 22:30 the streets are empty. All the afterparties start at 00:30 and as international you have free entry. Another big thing for Chinese people is that they don’t want to lose face: “You can’t tell the teacher in front of the whole class that you don’t understand his explanation, because this means that he didn’t give a good explanation than he will lose face.”

“There was something that looks like chocolate pudding, afterwards it appeared to be dried ducks’ blood.”

China has a big, but strange food culture. During his trip Niek ate a lot of strange things: “Once I was in a restaurant and there you had a boiling pan on the table in which you needed to cook meat. The people of the restaurant didn’t speak English so they took us to the kitchen so we could choose the meat we wanted to eat. There was something that looks like chocolate pudding, afterwards it appeared to be dried ducks’ blood. Very disgusting! But on the other side you can buy very good noodles for €1,40.”

Niek should studying in Shanghai recommend to everyone, not for education but for the experience and the culture: “Studying in Shanghai is a little bit like the introduction week in Nijmegen. You don’t know anyone and you need to take care of yourself.” Last piece of advice from Niek: If you are going to study in Shanghai, you need to live nearby the centre since there are more bars and restaurants. 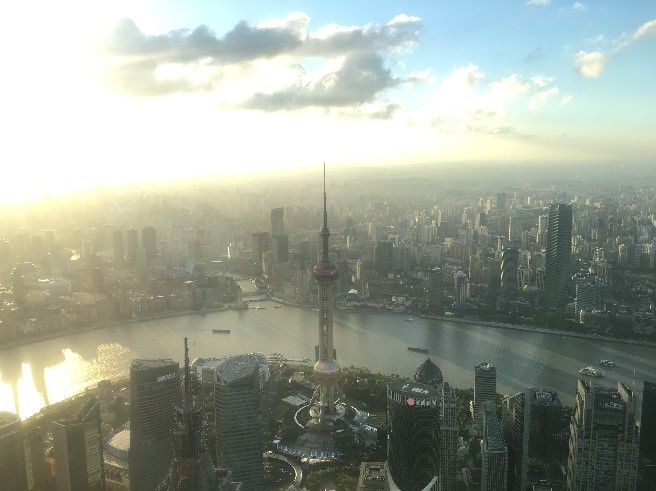