home > news > an interview with itrainee

A sunny afternoon in February set the scene for a quest for a couple of quotes. Erwin Raetsen from ITrainee kindly agreed to provide me with some insights into ITrainee. Our appointment took place in picturesque Boxmeer where Erwin works at the site of his client. As an illiterate when it comes to SAP my curiosity to find out what it is he does, was burning much like the sun was. For those of you that speak a little Dutch, a SAP consultant is not the person you go to for a juice cleanse recommendation. Granted, the capital letters in ITrainee may have suggested there was a more technical aspect to his job.

Erwin studied Operations Management and Logistics in Eindhoven. While he quickly noticed that the link between supply chain and IT was his ball park, Erwin was aching to put his theoretical understanding to a more practical use. An opportunity to do exactly that, presented itself at ITrainee. As a Functional SAP Specialist, Erwin is constantly making sure that SAP, a comprehensive administrative system, is always supportive of the processes. In essence this allows people to focus on the work that people do best and it allows the system to do what it does best.

Erwin noted that “if you enjoy working with systems, you can go in virtually any direction at ITrainee”. Personally he was always drawn to the complexity of machinery and innovation. This drive to dissect complex issues is something he applies on the daily in his job. For example, while a lot can be done with SAP, your imagination may go beyond the system’s capabilities. Sometimes this is merely because of limitations in SAP, other times it is a piece of hardware somewhere along the supply chain that is preventing smooth sailing. This means that problems occur at both an abstract and a more tangible level. In other words, “while the screen may be the same, everything else is different”. SAP consulting is inevitably intertwined with change and change management is therefore an important aspect of Erwin’s job. His projects are geared towards warehousing and in order to implement changes he has to communicate with multiple levels of an organization. This provides a very steep learning curve for his soft skills.

Before Erwin started at his client, he went through the comprehensive ITrainee training program in a small group of roughly five other young professionals. This training period lasts three months during which you will be learning on site for two days per week and studying at home for the other three days. You will progress through several themes to familiarize yourself with and understand SAP.  The first five weeks will be focused on functional training while the next last three weeks revolve around programming. After this general training, approximately one month is needed to become more familiar with the specific topic (warehousing, production, sales, etc.) you will be working with.

Don’t be fooled by those three weeks in the middle however! Programming is actually not a part of Erwin’s job as he went on to become a Functional SAP Specialist. A Functional SAP Specialist can therefore focus on the supply chain and keep a bird’s-eye view of the larger system. The actual programming happens among the ABAP Programmers. ITrainee is therefore a very suitable place to kick-start a career whether you are interested in programming or not. The main reason Erwin provided for his likes of ITrainee was the personal, informal approach to the traineeship. Imaginable barriers between the trainees and ITrainee executives are actually absent thanks to an open door policy and willingness to help. This personal approach also returns in the matching process towards the end of training. ITrainee methodologically scrutinize your match with their customers to ensure a magnificent mutual fit.

While you could work for the same client throughout your 18-month contract at ITrainee, you could also choose to work several projects for several clients. It is easy to imagine the merits of both trajectories. Erwin noted that he values building working relationships and felt that staying at the same client would be the perfect way to achieve that. He quickly added that his co-trainees did not feel deprived of the possibility to build working relationships, despite their shorter commitments to clients. It may turn out to simply be a personal preference.

To round this article off, it may be interesting to have a closer look into a “week in the life of” for SAP Specialists. You could hardly imagine the look on Erwin’s face when I coined the phrase ‘average week’. It seems, there is no such thing. However, coming from ITrainee the previously described willingness to help surfaced. In an attempt to distil a pattern from the last few weeks, Erwin came up with this division: 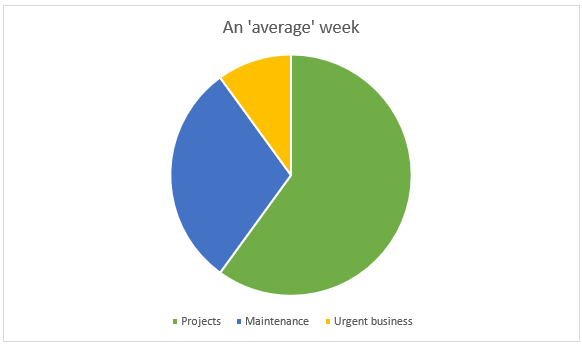 Are you interested in ITrainee after reading this article? Check out your possibilities here.